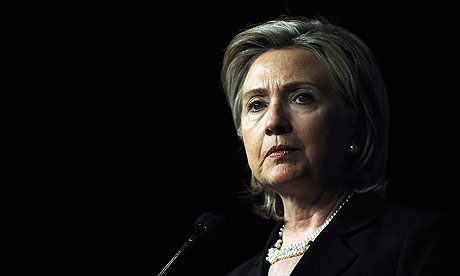 The UN's proposed sanctions on Iran are nothing like the 'crippling' package promised by Hillary Clinton. Photograph: Astrid Riecken/EPA

The furious row between the Obama administration and the leaders of Brazil and Turkey over how best to handle Iran's nuclear ambitions, following this week's controversial "uranium swap" deal in Tehran, reflects a more fundamental and widening disagreement over how the world should be run in the 21st century.

On Iran, as on other issues that it regards as critical to its security and national interest, Washington expects to have its own way – and is accustomed to getting it. If necessary, it stands ready to impose its will. This is what secretary of the state, Hillary Clinton, tried to do this week by whipping the UN security council into line.

Brazil and Turkey, two leading members of a new premier league of emerging global powers, have a quite different approach. They stress persuasion and compromise. In the case of Iran, instead of ultimatums, deadlines and sanctions, they prefer dialogue. It helps that neither country feels threatened by Tehran.

Lula da Silva, Brazil's popular president, typifies this outlook. He gave Clinton fair warning earlier this year that it was "not prudent to push Iran against a wall". More broadly, Lula has championed the cause of emerging countries, challenged the rich world's assumptions at theCopenhagen climate summit, and bearded the US over Cuba and Hugo Chávez.

Lula speaks for a world that was formed in the west's image but is increasingly rejecting its tutelage and its ideas. China and India are the foremost members of this pack. But their leaders' overriding priority is to build up their countries' economic strengths. For most part, Beijing avoids open fights with the Americans and their west-European allies. The time will come when that will change – but not yet.

Reacting angrily to Clinton's implied suggestion that somehow they had been suckered into the uranium deal by the crafty Iranians, Maria Luiza Ribeiro Viotti, Brazil's ambassador to the UN, said Brazil would not co-operate with US-initiated security council discussions on a new resolution. Without unanimity in the council, new sanctions are even less likely to be honoured or effectively implemented than is already the case now.

Brazil's foreign minister, Celso Amorim, also warned Washington to think again. "We have a chance to achieve a peaceful, negotiated solution [with Iran]. Those who turn down that possibility, or who think that sanctions or other measures would get us closer, they'll have to take responsibility for that." Such robust language is an eloquent expression of the changing power dynamic between the old superpower and its new rivals.

Recep Tayyip Erdogan, Turkey's prime minister and, like Lula, the leader of an emerging regional power, has a more direct interest in what happens in Iran. The two countries have a common border and a common belief that the Middle East has seen too much interference by foreign powers. Ankara does not want a nuclear-armed Iran any more than it wants a nuclear-armed Israel. In fact, it seeks to empty the region of all weapons of mass destruction.

But Erdogan is increasingly resistant to the US way of doing things, whether it is turning a blind eye to Israel's Gaza depredations, lecturing Turkey on Armenian history, or maintaining double standards on nuclear weapons. Like most Turks, Erdogan opposed the invasion of Iraq. He has led a rapprochement with Syria, another American bete noire. And he suggested this week that Washington was behaving arrogantly in dismissing the Iran deal.

"This is the time to discuss whether we believe in the supremacy of law or the law of the supremes and superiors," he said. "While they [the US] still have nuclear weapons, where do they get the credibility to ask other countries not to have them?" Yet despite his obvious anger, Erdogan still answered Clinton's criticism that the timeline for the uranium swap was "amorphous". Iran was expected to fulfil its part of the deal within one month, otherwise it would "be on its own", he said.

Ahmet Davutoglu, Turkey's foreign minister, made clear Ankara's opposition to further sanctions – and that he was not worried about upsetting the Americans. "We don't want any new sanctions in our region because it affects our economy, it affects our energy policies, it affects our relations in our neighbourhood," he said. Without Turkish co-operation, any new measures will struggle to have an impact.

That may prove to be the case anyway. Overlooked in the furore is the consideration that, thanks to stiff Chinese and Russian opposition, the proposed new sanctions, even if agreed as drafted, are fairly weak. This is nothing like the "crippling" package promised by Clinton, is largely voluntary or non-binding in nature, and will have no effect on Iran's oil and gas sales – its main source of income.

Supplementary, tougher measures are expected from the EU at a later date while individual countries, such as the US and Britain, may take additional, unilateral steps. So what the US would like to portray as the international community's united front against Iran is likely to boil down, in reality, to a narrowly-based coalition of the willing involving Washington and a handful of west-European states.

This week's symbolically significant attempt by Brazil and Turkey to do things differently, and the divisions the subsequent row exposed, suggests this already rickety traditional international security architecture, maintained and policed by a few self-appointed countries, cannot hold much longer. Power is shifting away from the west. You can almost feel it go.