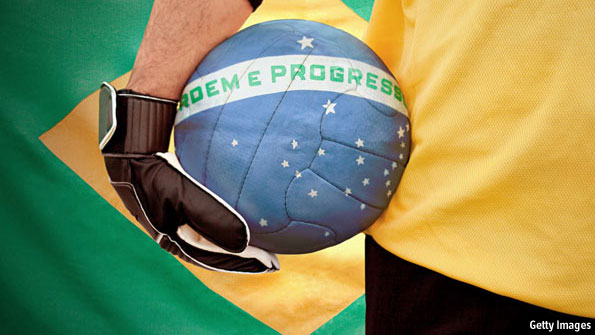 The Economist: Football in Brazil

Own goals from Senhor Futebol

Brazil hopes that the 2014 World Cup will boost its image, but the country’s football federation is shrouded in sleaze

IT IS the only country to have played in the final stages of every football World Cup and it has won it five times, more than anybody else. So Brazil feels proprietorial about the tournament, which it is to host in 2014. Another victory, good football and a party atmosphere would satisfy the demanding home fans, as well as many of the 600,000 expected from abroad. But for Brazil’s government the run-up to the tournament is not going well.

It is becoming clear that promised improvements to the country’s creaking transport systems are unlikely to amount to much. Of 49 planned urban-transport schemes in the host cities, work has started on just nine. Airport upgrades are running behind schedule too, and more than half are just temporary fixes. The government is trying to damp down expectations. In an interview with Carta Capital, a weekly magazine, Brazil’s president, Dilma Rousseff, said that the urban-transport improvements were not essential for the tournament’s success. Miriam Belchior, the planning minister, suggested that the government would declare holidays on match days to avoid traffic jams.

Sepp Blatter, the president of FIFA, world football’s governing body, has written to Ms Rousseff expressing concern. But Ms Rousseff has cause to worry about FIFA. Just when she is doing her best to clean up the country’s politics—she has sacked four ministers over corruption claims—the World Cup is being run by one of football’s most tarnished figures. And claims of sleaze keep on coming.

Ricardo Teixeira, who is president of the local World Cup organising committee and a member of FIFA’s executive committee, has been chairman of the Brazilian Football Confederation (CBF) since 1989. He is a protégé of João Havelange, who ran FIFA for almost a quarter-century until 1998. Mr Teixeira has been fighting accusations of graft for years. In 2001 investigations by Brazil’s Congress into corruption in football found irregularities in a deal arranged by Mr Teixeira under which Nike, an American sportswear firm, sponsored the national team. The congressional committee of inquiry passed on to the public prosecutor some 13 charges against him, including embezzlement, money laundering and tax evasion. All were subsequently dropped. (Nike says the contract was “fully legal in essence and spirit”.)

“Panorama”, a BBC television programme, has accused Mr Teixeira and Mr Havelange of taking bribes in the 1990s related to marketing rights for games. Earlier this year Lord (David) Triesman, the man who launched England’s failed bid to host the World Cup in 2018, said that Mr Teixeira had asked for money in return for his vote.

In an interview in Piauí, a Brazilian monthly, Mr Teixeira denied the BBC’s claims. He said the English were “pissed off because they lost” and that he would have his revenge on the BBC: as long as he is at the CBF and FIFA, “they won’t get past the door.” He boasted that in 2014 he would do “the most slippery, unthinkable, Machiavellian things [such as] denying press credentials, barring access, changing game schedules.” The sports minister, Orlando Silva, had to promise that all journalists would be fairly treated and allowed to do their work.

A FIFA investigation cleared Mr Teixeira of Lord Triesman’s allegations. Mr Havelange has not responded to the BBC’s allegations. But the International Olympic Committee, of which Mr Havelange is a member and which has stricter ethical standards than FIFA, is investigating them. This week a Brazilian prosecutor declared that he will order police to look into whether Mr Teixeira was guilty of money laundering and tax crimes.

Another brewing scandal concerns a friendly game between Brazil and Portugal in Brasília in November 2008. Associates of Mr Teixeira received millions from the event. Around the same time they appear to have signed contracts committing them to pay large sums to Mr Teixeira for purposes that remain obscure. Six months before the match Sandro Rosell, who is now the president of Barcelona Football Club, the European champions, became a director of Ailanto, a sports-marketing firm in Rio de Janeiro set up shortly beforehand.

Mr Rosell has been doing business with Mr Teixeira for years: he moved to Brazil as Nike’s director of sports marketing in 1999 to manage the company’s relationship with the CBF. A week before the Brasília match, the government of the Federal District signed a contract to pay Ailanto 9m reais ($4m at the time) for the marketing rights and for other loosely defined services, including arranging transport and accommodation for both teams’ players. (The then governor of the Federal District, José Roberto Arruda, was later imprisoned and charged by the Federal Police over corruption relating to other matters.)

That deal is now being investigated for padding and corruption. The public prosecutor’s office in Brasília says that receipted expenditure relating to the game was only around 1m reais—and that in any case the Football Federation of Brasília (FBF), an affiliate of the CBF, had paid. It also says that, although the Federal District government bought the rights to the game, the money from ticket sales went to the FBF. Brasília’s police force has searched Ailanto’s premises in Rio de Janeiro, seizing documents.

Alongside these deals run three others whose purposes are not immediately obvious. The Economist has copies of what appear to be the contracts for all three. One dated March 2009 commits Vanessa Precht, a Brazilian who formerly worked at Barcelona FC and who was Mr Rosell’s partner in Ailanto, to leasing a farm in the state of Rio de Janeiro from Mr Teixeira for 10,000 reais a month for five years. Rede Record, a Brazilian television network, visited the farm in June and could find nobody who had heard of Ms Precht. Two Brazilian congressmen have called for an investigation to establish whether the deal was a way for Ms Precht to return to Mr Teixeira some of the money Ailanto earned from the Brazil-Portugal friendly.

The other two contracts were signed separately in July 2008 by Mr Teixeira and Mr Rosell with Cláudio Honigman, a financier who is a partner of Mr Rosell’s in a different Brazilian sports-marketing company, Brasil 100% Marketing. Mr Honigman undertook to pay each man 22.5m reais to buy back options on 10% of the shares in Alpes Corretora, a São Paulo brokerage, which the contracts state he had previously sold to them. A spokesman for Alpes Corretora has told The Economist that Mr Honigman never had any interest in any shares in the company. Mr Rosell and Mr Teixeira declined to comment for this article. Mr Honigman’s lawyer says that he has been unable to contact him. Ms Precht did not respond to our request for an interview.

The panjandrums of international football have traditionally been untouchable: FIFA is a law unto itself. Mr Teixeira has kept his position at the top of Brazilian football despite previous corruption claims. But this time may be different.

FIFA’s lawyers are trying to block the publication of a report by the public prosecutor in the Swiss canton of Zug on a criminal investigation into payments received by senior FIFA officials in the 1990s. The officials’ defence was that taking commissions was not illegal under Swiss law at the time. But since the money was intended for FIFA, the prosecutor investigated the individuals pocketing it for criminal mismanagement and misappropriation. The investigation was dropped after two officials agreed to pay 5.5m Swiss francs ($6.2m) to the canton, which passed the money to FIFA and charities. Both denied criminal wrongdoing.

The report was shelved at the request of the officials’ lawyers. So their identities have not been disclosed, though the lawyer for one of them said that his client is an old man in poor health who no longer has an official role. That appears to describe Mr Havelange, who is 95 and is FIFA’s honorary president. The Zug high court is to decide in the next few weeks on petitions by journalists for the release of the report. The Economist contacted Mr Havelange’s office in Rio de Janeiro regarding these matters, but he declined to speak to us.

Inside Brazil, too, the ground is shifting under Mr Teixeira. Ms Rousseff has appointed Pelé, Brazil’s most famous footballer, as the government’s honorary World Cup ambassador and is trying to freeze Mr Teixeira out. The organising committee left Pelé off the guest list for the World Cup draw in July. Ms Rousseff brought him along anyway, and also made much of him at a ceremony on September 16th marking 1,000 days till kick-off. “With all due respect to FIFA and the CBF,” Ms Rousseff told Carta Capital, “the face of [the tournament] abroad will be Pelé.”

from the print edition | The Americas