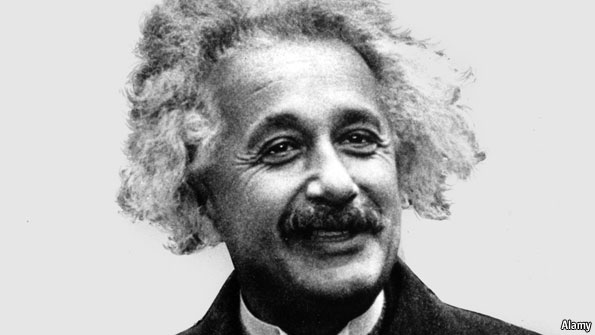 Faster than the speed of light

What does an experiment that seems to contradict Einstein’s theory of relativity really mean?

IN 1887 physicists were feeling pretty smug about their subject. They thought they understood reality well, and that the future would just be one of ever more precise measurements. They could not have been more wrong. The next three decades turned physics on its head, with the discovery of electrons, atomic nuclei, radioactivity, quantum theory and the theory of relativity. But the grit in the pearl for all this was a strange observation made that year by two researchers called Albert Michelson and Edward Morley that the speed of light was constant, no matter how fast the observer was travelling.

Some physicists are wondering whether their subject has just had another Michelson-Morley moment. On September 23rd researchers at CERN, Europe’s main physics laboratory, announced that subatomic particles called neutrinos had apparently sped from the lab’s headquarters near Geneva, through the Earth’s crust, to an underground detector 730km (450 miles) away around 60-billionths of a second faster than light would take to cover the same distance (see article). The difference in speed is tiny, but the implications are huge.

As every schoolboy (and journalist with access to Wikipedia) knows, this flies in the face of special relativity, a theory devised by Albert Einstein precisely to explain the observation of Michelson and Morley. Special relativity, which physicists thought they had tested almost to destruction, and found not wanting, states that as objects speed up, time slows down. Time stops altogether on reaching the 299,792,458 metres per second at which light zaps through a vacuum. Go any faster and you would be moving backwards in time.

If CERN’s neutrinos really are travelling faster than light, it is therefore a big deal. Modern physicists, aware of the hubris of their 19th-century predecessors, have never thought their subject closed. But nor have they found a c**** in the armour of relativity that they could use to prise the whole thing open. This would be such a c****. Their caution in the face of the result—the public statements that it is probably explained by experimental error, even though the researchers involved have been over their equipment with a fine-tooth comb—is understandable. No one wants to get egg on his face by having missed something obvious.

A theory of everything

If the result is true, though, it does change everything. In particular, the likely explanation is that the neutrinos are taking a short-cut through one of the extra dimensions which string theory postulates are hidden among the familiar four of length, breadth, height and time. Measured along this five-dimensional route, Einstein might still be right. (It would not so much be that he made a mistake as that he did not know the whole story.) Indeed, moving beyond four dimensions in this way would also allow physicists to try to integrate Einstein’s work with quantum theory, the other great breakthrough of 20th-century physics, but one which simply refuses to overlap with relativity. A unified theory of everything, including perhaps as many as 11 dimensions, would then beckon.

That is a lot to hang on a single, unconfirmed observation. But then, in 1887, no one could have foreseen the consequences of the Michelson-Morley experiment. If a glitch is found in CERN’s result, the whole thing will rapidly be swept under the carpet and forgotten. If there is no glitch, an astonishing future of understanding beckons.

from the print edition | Leaders

The future of physics (1)

So long, and thanks for all the quarks

As an announcement is made in Europe that may shake physics to its foundations, America’s largest particle accelerator is to be switched off 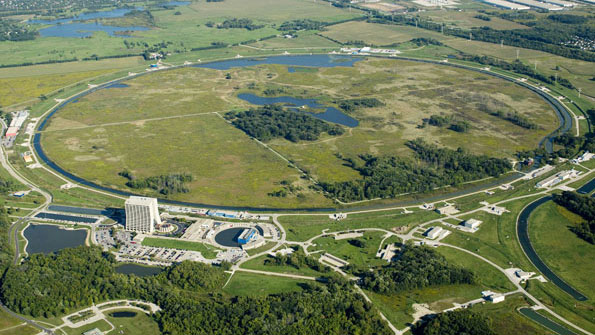 ON SEPTEMBER 23rd researchers at CERN, Europe’s main particle-physics laboratory, caused a stir. They suggested that neutrinos—ethereal particles which pervade the universe but rarely interact with anything while they are doing so—can travel faster than light. According to Albert Einstein’s special theory of relativity, this is impossible.

Physicists from OPERA, one of the experiments at CERN, sent beams of neutrinos through the Earth’s crust from the organisation’s headquarters on the outskirts of Geneva to an underground laboratory 730km (450 miles) away beneath Gran Sasso, a mountain in the Apennines. The neutrinos appeared to be reaching the detector 60 nanoseconds faster than light would take to cover the same distance—a small deviation, and one that might be written off as experimental error if an experiment in America, called MINOS, had not detected a similar anomaly in 2007.

In this section Related topics

The MINOS result, too, was thought an error. Now researchers are not so sure. Most are unwilling to believe Einstein was wrong. A few, though, are contemplating the idea that OPERA’s neutrinos are interacting with the matter of the Earth’s crust in a way, hitherto unknown, that allows them to take a shortcut through one of the extra seven dimensions that are hypothesised, by some versions of theoretical physics, to exist alongside the familiar four of length, breadth, height and time. If that is true, it would take physics beyond the theory of relativity, just as Einstein took the subject beyond Newton’s laws of motion and gravity, and might allow physicists to merge relativistic ideas with those of quantum theory—a goal of the subject for almost a century.

As science cuts ever deeper into the fabric of nature, discoveries like this have become the preserve of huge, costly machines. Ironically, the news arrived at the moment one such device faces execution. At 2pm on September 30th, the last day of the American fiscal year, Helen Edwards, a septuagenarian American physicist, will press a red switch, and then a green one. By doing so, she will kill the Tevatron—a particle accelerator (pictured above), with a circumference of 6.3km, that she helped, in her younger days, to build.

For a quarter of a century before CERN’s Large Hadron Collider (LHC) began working in earnest in 2009 the Tevatron, at the Fermi National Accelerator Laboratory (Fermilab) in Batavia, near Chicago, dominated high-energy physics. It was the first machine to smash particles together with energies in excess of 1 trillion electron-volts—or 1 TeV, whence its name. This led to the discovery of the top quark, the heaviest elementary particle seen to date and the penultimate piece of the jigsaw puzzle known as the Standard Model that is the best description physicists have of the basic components of the universe.

For a few months in 2010 it looked as though the Tevatron might get a reprieve in order to find the last (and heaviest) missing bit of the model—the Higgs boson, which is thought to give other particles their mass. That would have been a delicious victory, as the LHC’s first goal is the discovery of the Higgs. In the event, though, Congress pulled the plug.

Before September 23rd, that was a matter of wailing and gnashing of teeth. It still is, of course. No one likes having his toys taken away. But if the OPERA result holds up, Fermilab may find itself in a far more interesting position than it expected.

Discovering the Higgs is important, no question. It is, though, a bit old hat given that, as a theory, the Higgs mechanism goes back to the 1960s. Supraluminal neutrinos, if they really exist, are something completely new. And Fermilab is well placed to investigate them. It already whips up the world’s most intense beams of neutrinos, using kit that has nothing to do with the Tevatron. As luck would have it, a project called NOvA, which should start collecting data in the spring of 2013, will send neutrinos through the Earth’s crust from Batavia to an underground detector 810km away in Minnesota. If NOvA finds the same result as OPERA and MINOS, then the post-Einsteinian era of physics really will have begun, and Fermilab will be in the thick of it.

Indeed, NOvA is only the start. Pier Oddone, Fermilab’s boss, plans to follow it with the Long Baseline Neutrino Experiment (LBNE), which will send a yet-more intense beam of the particles to an underground laboratory in South Dakota. After that, the mysteriously named Project X will push the intensity of the neutrino beam still higher.

A bold vision, then, and one that might just have become far more important than its prophets could possibly have imagined. The plan does, however, depend on American taxpayers stumping up huge amounts of money. The price tag for LBNE alone is $1 billion. And that is causing nervousness. Late in 2010 one government agency, the National Science Foundation, unexpectedly withdrew its support for the construction of the South Dakota laboratory. The Department of Energy adopted the orphaned project, but Congress then failed to appropriate the $17m needed to get it going, so the whole thing hangs in the balance. The fate of Project X, too, is uncertain, though its prospects are helped by the fact that India is keen to get in on the fundamental-physics game and has made what Dr Oddone calls “a very substantial commitment” to the endeavour.

Though it may gall those Americans who would like their country to continue to go it alone in matters physical, that multinational deal over Project X may represent the future. It already looks likely that the successor to the LHC, a device called the International Linear Collider (ILC), will be built in Japan (if it is built at all). Most physicists agree it would be America’s for the asking if Americans wanted it, but the current Congress seems not to, because it would entail doling out half of the $20 billion the ILC is expected to cost.

Even if it ends up on the other side of the Pacific, though, America will be expected to make some sort of financial contribution to the ILC. And the odd American accent is not unknown even in the corridors of Geneva. In matters of particle physics, then, patriotism is passé. The “E” in CERN originally stood for “European”, but the organisation already boasts Israel as a member, and India, Japan and the United States as observers. Moreover, more than two dozen other non-European countries have co-operation agreements with CERN. The passing of the Tevatron may cause the shedding of a manly (and womanly) tear or two among America’s physicists. But physics belongs to no one country. That said, you can bet the lads and lasses at Fermilab will be happy to grab any credit they can for helping dethrone relativity. For in their heart of hearts, even the sceptics who say they think the result from OPERA must be a mistake hope that it is not.

from the print edition | Science and technology