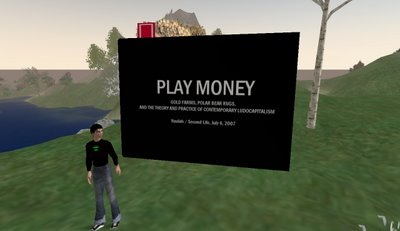 Three nights ago I was supposed to catch a flight from Chicago to São Paulo, to take part the next day in an event I was very much looking forward to: A panel on "Universes and Metaverses," consisting of me (talking about the usual), anthropologist Eduardo Viveiros de Castro (weaving my shtick in with his rich and increasingly famous ideas about the Amerindian "multinaturalist" world view), and moderator Guilherme Kujawski (making sure the panel didn't stray too far from its context, a four-day symposium on "Memory of the Future" at the Itaú Cultural Institute). When I arrived at O'Hare to check in, however, it turned out I was not going to be flying anywhere: I had no visa for Brazil and (having traveled there visa-free twice in recent but more diplomatically laid-back years) no idea I needed one now.

What to do? I was mortified. "Shock and awe" was the report from Kujawski and the rest of the Itaú crew. But then a remarkable thing happened: They rolled with it. "You have a Second Life avatar," noted Kujawski, and the institute had one too. They could project their avatar's view onto the auditorium screen and patch my voice in via Skype connection to the audio system. The one remaining hurdle -- how to present my PowerPoint slides from 8000 kilometers away -- was overcome with a little help from my friend Falk Bergman, master craftsman of Second Life books and other fine virtual gadgetry, who quickly ginned up a viewer for me to drop the slides into.

It was hard work to get it all set up, especially on the São Paulo end of things, but it was a lot easier and a lot more effective than I imagined it would be. The resulting discussion actually was a discussion, and the audience, Kujawski later IM'd me, was "mesmerised." I don't know that I altogether believe that, but even if the audience was merely "awake" and "not demanding its money back," I'd have to agree with his more public declaration that the experiment was "a success."

And that's not an entirely easy thing for me to concede. I have often argued, even on the record with reporters, that Second Life's practical applications are vastly overrated, and that its core appeal will always be the playful, toylike nature of the environment. But on Friday, Second Life proved me, well, maybe not wrong, but rash. As a medium for remote slide presentation it wasn't just a cute solution but the simplest and most elegant I could find anywhere; as a communications channel, it provided a more stable connection than Skype did; and if we'd had time to experiment with Second Life's new voice capabilities (said by some to provide better audio quality than Skype), it might even have solved all our problems on its own.