The Penguin and the Leviathan: How Cooperation Triumph over Self-Interest 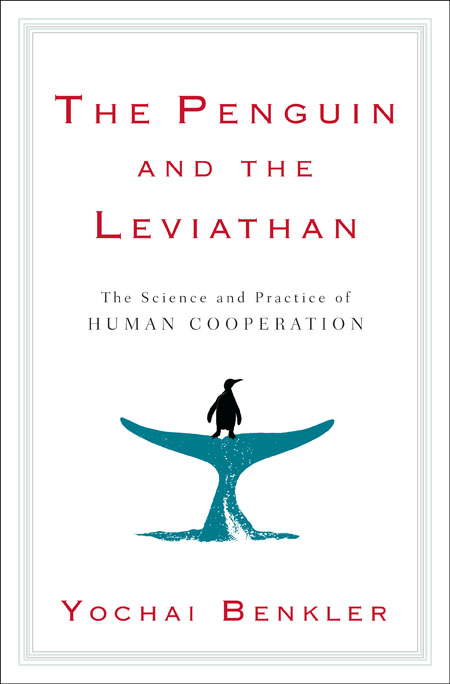 The Penguin and the Leviathan: How Cooperation Triumph over Self-In...

For the millions who, by their acts every day,

small and large, give humanity its name.

CHAPTER 1 : THE PENGUIN Vs. THE LEVIATHAN (capítulo disponível no site amozon.com)

What do Southwest Airlines or Toyota’s shop-floor processes, Chicago’s community policing program, and Wikipedia or Linux have in common? The answer is that they are all systems that have relied on human cooperation, rather than purely on incentive compensation, punishment, or hierarchical control. Toyota structured its shop-floor relations around teamwork, and engineered its supplier relations into a collaborative network built on trust and long-term cooperation, instead of a top-down system governed by process engineers and competitive bidding. Until its recent troubles, for more than two decades its model was seen as revolutionary and the primary reason for its becoming the world’s largest automobile manufacturer. Southwest Airlines similarly has outperformed its competitors by a wide margin, fostering a collaborative team spirit based on relative autonomy, high trust, and a pervasive sense of fair treatment among employees. Rather than cracking down harder on offenses, the Chicago police force has, for two decades, led the drive to a community-based model of policing, in which neighbors and police officers work together to prevent crime more effectively. Wikipedia relies on content created entirely by volunteers, allowing anyone and everyone to contribute their time and knowledge, rather than paychecks or editorial control, and Linux, the open-source software, depends on massive collaboration, whose outputs they share and no one owns exclusively. The way these organizations work flies in the face of what has long been the dominant assumption in Western society about human motivation: that human beings are basically selfish creatures, driven by their own interests. For decades economists, politicians and legislators, business executive and engineers have acted as though all systems and organizations had to be built around incentives, rewards, and punishment in order to get people to achieve public, corporate, or community goals: if you wanted to reduce crime, enact stronger penalties, like the three-strikes laws in California that sentence people to prison for life if they are convicted of third felony. If you want employees to work harder, incorporate pay for performance and monitor their results more closely. If you want executives to do what’s right for shareholders, pay them in stock. If you want doctors to take better care of patients, threaten them with malpractice suits so that fear of litigation  makes them take better care. The model in all these is the same-we are driven by self-interest; to get others to act well, you have to monitor, reward, and punish them. And yet all around us we see people cooperating and working in collaboration, doing the right thing, behaving fairly, acting generously, caring about their group or team, and trying to behave like decent people who reciprocate kindness with kindness. Nowhere has this fact been more obvious than online, where Wikipedia and open-source software have been so successful. Tux, the Linux Penguin, is beginning to nibble away at the grim view of humanity that breathed life into Thomas Hobbes’s Leviathan.

Testimony of Dr. Alan Greenspan to the Senate Committee of Government Oversight and Reform,

Alan Greenspan: Those of us who have looked to the self-interest of lending institutions to protect shareholder’s equity (myself especially) are in of shocked disbelief.

Senator Henry Waxman: In other words you found that your view of the world ideology was not right. It was not working.

Greenspan: Precisely… that’s precisely the reason I was shocked because I’ve been for forty years or more working exceptionally well.

Former Federal Reserve chairman Alan Greenspan’s unwavering belief in the power of self-interest is bases on two of our society’s most widely weld, long-standing, and erroneous assumptions. The first is the assumption that inspired philosopher Thomas Hobbes’s Leviathan: that humans are fundamentally and universally selfish, and the only way to deal with people is for governments to step in and control us so that we do not, in our shortsighted pursuit of self-interest, destroy one another (or make one another’s lives too miserable to bear). The second assumption was Adam Smith’s alternative solution to our assumed selfishness- the Invisible Hand. Smith’s Wealth of Nations argued that because humans are inherently self-interested and human decision making is driven by the rational weighing of costs and benefits our action in a free market would tend to serve the common good. In other words, in our pursuit of self-interest we would work to fulfill one another’s needs, not because we care about one another’s well-being, but because it is mutually advantageous to do so. Though their prescriptions are quite different, both Leviathan and Invisible Hand have the same fundamental starting point: a belief in he selfishness of mankind. The former tries to curb and control selfish human behavior through monitoring and punishment; the latter imagines market as places where self-interest will lead people to act in ways that serve the common good.

The major alternative in Western political thought coalesced from the work of wide array of thinkers: from French philosopher Jean-Jacques Rousseau, through Scottish Enlightenment philosopher David Hume and Adam Smith’s other major work, The Theory of Moral Sentiments, to the work of major anarchist philosopher Pierre-Joseph Proudhon and Peter Kropotkin. Broadly speaking, this far more flattering view sees human beings fundamentally capable of empathy possessing sentiments that compel us to act morally, cooperatively, or generously, not only in our own self-interest. This does not claim us to be saints; it merely says that we are capable of virtue, and that we need not be robotic slaves to the government’s Leviathan, automatons guided by the Invisible Hand of the market, or parts of the collectivist Hive of fascism to serve common wealth. In honor of Tux, the symbol of Linux, I’ll call this alternative the Penguin.